What is Worship? - Part Two

So, for the second year running we have failed to make it to Hawkshead Hill for our pre-Christmas celebration.
This year, however, we were prepared. We didn't even set out - the M61 and M6 having been closed for much of yesterday. Instead, we arranged with HHBC that we would do a video link during their service.
Amazingly, the technology worked perfectly.
We gathered at 10.30, had a cup of tea and had just started singing some carols when Kath called us. We had the computer plugged in to the TV, so the picture was more than visible, although one or two friends (Patsy & Mike) fell off the edge of the screen.
We shared news and introduced one or two new friends, then Pauline read an Advent liturgy as she lit the fourth Advent Candle.
We were about to hang up, when Olwen suggested that we should sing a song together. Spontaneity is wonderful, but sometimes presents challenges. There was a slight time delay, which made singing "interesting" - and as we hadn't planned, we were using Rejoice and Sing, while HHBC were using Mission Praise, so words diverged at times!
But we all finished together - and we did feel that we had been able to share fellowship together.

Having separated, we carried on with some favourite carols. But having read Catriona's posts from today - and having the computer set up, we couldn't help but introduce the concept of Flash Mobbing by showing three videos:

For Olwen and David in particular, this opened up a whole new world to them and discussion which ensued revolved around the 'miracle' of technology. Felt like worship to me.
Posted by Tim at 13:32 No comments:

A Voice Crying in the Wilderness

My contribution to the Hopeful Imaginationi, Advent blog, cross-posted here:
No one filled Tommy’s wellies
as we turned on Christmas lights
in the park.
No one forgets your name
while taking your loan repayment
on Thursdays.
No one gives you chocolates
way past their sell-by date:
a thank-you.
Tommy has moved.
Kath has died.
Elsie has died.
Jimmy is in Chorlton
but where are his kids?
Margaret, now well again
is in Withington.
Beryl, across the park
has regained her spring.
But where are the Nguyen’s?
Where’s Canadian Steve?
Where are the nameless Czechs
who loved to hear me play the guitar
over their garden wall?
What has happened to Phil, the dealer?
Or Angela or Janet, his terrified pawns?
Where is Jimmy, whose unpronounceable name
was never given?
And where is the church they were all drawn to?
Where is the church where community gathered?
Where is the church where people communed?
I will destroy this temple that is made with hands,
and in three days I will build another,
not made with hands.
Three days
Three months
Three years
A thousand years is like a second.
Two thousand years—a baby born
Two thousand years—a baby sought
Two thousand years—a baby forced to flee
Three days
Three months
Three years?
Homeless.
Refugee.
Asylum seeker.
Censused in Bethlehem
Dwelling in Nazareth
Hiding in Egypt
Lost to the system
Where are the Bar-Josephs?
Whatever happened to Yeshua? 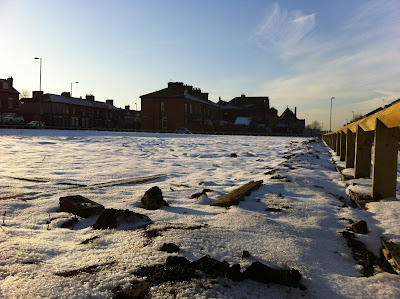 “This is my church.

This is where I heal my hurts
For tonight
God is a DJ.” 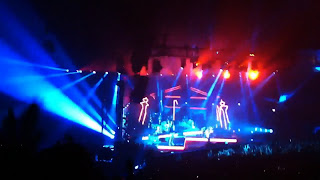 The scene is not a church or cathedral, but a huge warehouse of an arena, packed with people of all different ages, juggling pints of beer in plastic glasses, taking photos with mobile phones and “bouncing” with arms waving ecstatically in the air. The music is loud and strobe lights pulse with the rhythm of the beat. An image gradually builds up across the light bank that forms the backdrop of the stage. Deborah thinks the image is a huge church or cathedral. I interpret it as skyscrapers forming a cityscape. Either way on the words “God is a DJ” the lights explode with a flash of sudden revelation.
After such a call to worship and time of praise, then comes the sermon, a powerful prophetic and poetic oratory, “misinformation… racism… fear… greed… inaction is a weapon of mass destruction”, underscored by moving words of light proclaiming the shocking world statistics of injustice and oppression and cost to human lives.
Then comes stillness and confession as we are humbled and challenged with the words of Salva Mea, “How can I change the world if I can’t even change myself?”
We are then invited to participate in a congregational sharing of a vision of how things could be, a vision of the kin-dom, “We come one” “Christian and Muslim, We come one…. Beneath the skin we are all the same, We come one”.
At the end, the skinny bare-chested, middle-aged singer/rapper bows low, not so much to the congregation but to something greater or deeper or maybe the divine image within, and sends us out with words of profound thanks and blessing, exhorting us to honour ourselves and each another and build a different kind of world.
Is this not the message of Advent hope that John the Baptist proclaimed a long way from the synagogue or temple hall? Is this not a glimpse of the Dancing Scarecrow? The poet, prophet and priest?
Maybe I should explain? Last Saturday, having spent most of the day preparing the Advent service for the next day on the theme of John the Baptist, we went, along with around 20,000 other people to see the misnamed Faithless live in concert at the MEN arena in Manchester.
Posted by Clare at 09:56 No comments:

Advent usually flows from one week to another, linking thematically as we light the candles.

One of the downsides to homelessness is that this year, we have no such rhythm. Last week at our house, we made Christmas cards for the churches we have visited. Next week, we have a joint carol service with one of our ecumenical partner churches, and the last week of Advent, we have our much anticipated visit to friends in Hawkshead Hill.

So yesterday stood alone as the only Sunday in which we would explore the Advent themes together. The last couple of services we have taken at St PJ's have been rather too chaotic even for us (see Clare's reflection on Remembrance below!) so we wanted to be well prepared in advance. We also wanted to do an all-age service as the last couple have included a reflection as well as an all age activity.

How to sum up Advent in a single service, including folk in an age range from 5 to 90s?

An Advent Calendar, of course.

Now, for those who are immediately objecting that the whole point of an Advent Calendar is that is is about anticipation and waiting, and that to open all the doors in a single hour's service, I do quite agree - but in our defence, for some of our more junior members, the anticipation is very much about the end of the service! 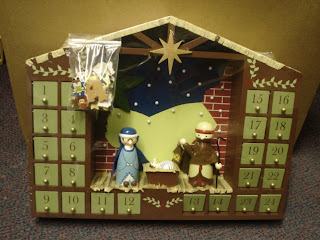 However, that aside, Clare has an Advent Calendar with boxes - designed, I suspect, once again to subvert the Advent message of hope by filling them with chocolates to gratify immediate desires! However, we filled the boxes with symbols, messages and elements of the liturgy. So, for example, the first box contained a Call to Worship which whoever opened the box had to read out. The second contained a reference to our first hymn and so on. Others contained letter outlines for the children to colour in which spelled out the word H O P E.

If you know the children's newspaper "First News" it frequently contains articles which explain difficult topics in a manner suitable for younger children. Last week, in the runup to World AIDS Day there was a wonderful article about a boy who is HIV positive, but who, with the help of retroviral drugs is able to live a full active life. A real story of hope.

This was interspersed with the Advent hope readings from Isaiah and Matthew.

Yet another box contained a link to a video of the Children of Kabul from the Newsround website. The remaining boxes were filled with images of hope from the internet. Barack Obama's famous election poster and a beautiful (Photoshopped?) glass bottle of hope.

The only thing we would do differently another year is that rather too many of the boxes were filled with a tightly folded piece of A4 paper. The communion box contained a piece of bread which the opener had to guess meant that it was time for eucharist. This worked rather better than the paper messages. So, with a bit more time and imagination, we would look for more symbols to put in the boxes.

Number 24 contained a Barbie cup and saucer - and we all filed to the back of church for a warming cup of coffee!
Posted by Tim at 11:02 2 comments: