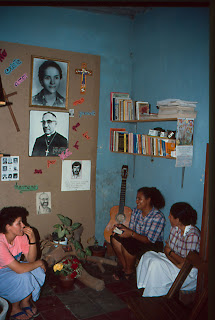 The three women are religious sisters – nuns, if you like – who, for one reason or another found that there was no room for them in the church to which they belonged. Maria, Carmen and, on the right, Marie Isabel. On our first visit to El Salvador, when the civil war and persecution of the church was still going on, we stayed with them in their Pequeña Comunidad – Little Community in the hope that the presence of a few foreigners might offer them some protection from the infamous Death Squads.

This photograph was taken in their little, open air chapel where each day we gathered together to pray. I particularly remember this evening, which was Carmen’s, in the middle’s birthday. We read from the Bible, sang a hymn to the accompaniment of Carmen’s terrible guitar playing, and shared a celebratory Flan – a disgusting gateau made mostly of confectioners creams, and covered in tinned peaches. All the while, in the darkness, we could hear the rattle of machine guns firing on the nearby volcano.

It was one of the most joyful evenings of my life. One which I will never forget.

But, to my shame, I must confess that I had forgotten the name of the young man whose photograph hangs just below that of Monseñor Romero on the wall behind their beautiful log altar. I wasted much of last Thursday ploughing through my records to try to find a reference to him in one of my old sermons. And there, in a sermon from ten years ago, it was.

Below Miguel is Ignatio Martín Baró, one of the six Jesuit theologians murdered at the University in San Salvador in 1989 along with their housekeeper and her sixteen year old daughter. Their photographs appear next if we move clockwise around the wall. At the top is Silvia Ariola. Silvia had been a member of this little community and was one of the 612 members of her church who were murdered or disappeared by the death squads.

And right in the centre is the face of the former Archbishop of San Salvador, Monseñor Oscar Romero.

Romero had been a conservative, academic-minded priest whose appointment initially dismayed the more radical sections of the church in El Salvador. But just days after Romero was appointed, another priest and friend of Romero’s, Rutilio Grande was murdered together with two of his parishioners as they travelled to Mass. Romero travelled to say mass on the spot where Grande was murdered, and began to hear firsthand the stories of unbelievable hardship and oppression from the villagers. And in spite of the many threats to his life and the stubborn refusal of the Salvadorean government to act, Romero began to speak out and demand first investigations into the stories he heard, and, as those demands were ignored, he began to call for justice for the poor and oppressed.

Famously, on 23 March, 1980 Romero addressed his Sunday sermon directly to the conscripts and recruits of the Salvadorean military who were conducting so much of the repression:

“…before any human order to kill, God’s law must prevail which says, “Thou shalt not kill!” No soldier is obliged to obey an order which goes against the law of God. No one has to obey an immoral law. It is high time you recovered your consciences and obeyed your consciences rather than the orders of sin. The church, the defender of the rights of God, of the law of God, of human dignity, of the person, cannot remain silent before such and abomination…In the name of God, in the name of this suffering people whose cries rise to heaven more loudly each day, I beg you, I order you in the name of God: Stop the repression!”

The next day, thirty years ago this week, that voice was silenced by a single bullet fired from the open door of the chapel of the cancer hospital where Romero chose to live instead of occupying the Archbishop’s palace. Romero had just finished the sermon and was about to commemorate the shedding of Christ’s blood when his own blood was spilled.

Fifty more, nameless, voiceless victims were murdered when troops opened fire on Romero’s funeral. Their blood mixed with the blood of the estimated 75,000 other nameless victims of El Salvador’s bloody, US and UK funded civil war.

Which is why it was so important for me to remember the name of Miguel Portillo. Miguel was a student at the Baptist college in El Salvador who, in the face of the ongoing bloodshed, abandoned his studies and went to join the guerrilla army.

For his pains, he was disowned by many within his own church and his own family. And when he was killed, just weeks before we visited, he became just another nameless, voiceless victim .

And in remembering the victims of human sin, we remember the one in whose name we meet together.

“We have never preached violence,

except the violence of love,

which left Christ nailed to a cross,

the violence that we must each do to ourselves

to overcome our selfishness

and such cruel inequalities among us.

the violence of hatred.

into sickles for work.”

I am not good in the mornings - it takes me a while to come round even with the help of a strong coffee. But yesterday, I was woken up with a start by the voice on the radio announcing the morning service. Now usually at this point, I groan, switch off the radio and stagger through to the office to start writing the prayers for our own morning service. Not so yesterday as the voice to my amazement and delight clearly stated that the morning service was coming from Calgary Baptist Church in Cardiff and led by the Revd. Dr. Craig Gardiner himself!
What a refreshing change to listen to words that so clearly reflect the reality of our lives here in Openshaw. What a breath of fresh air to hear a Biblical reflection, woven throughout the service and spun in the thought-provoking sermon by Dr. Karen Smith, on the story of a woman as central, dynamic and deeply courageous. And what an affirmation to hear my own ministry, which I have often described as "walking with people in pain" validated and honoured in this way. For many years, as a church we have waited with, and walked with a community in pain, sharing its hopes and its disappointments.
We have often described our ministry as looking on as a community is crucified and over the last few weeks we have watched the interior of our old church building ripped open and exposed to the elements before finally being demolished. And now, we too are waiting, waiting with pain, waiting in pain. Like Mary Magdalene we are not sure how the story will end. But like Mary Magdalene, we wait by the tomb of our hopes and dreams and wait for the dawn of the resurrection.
Thank you Craig, Karen and the community of Calgary Baptist Church in Cardiff.
Posted by Clare at 11:16 3 comments: