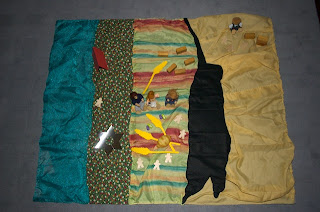 The original idea for Dancing Scarecrow was as a home for our Godly Play resources. Then we realised that what we do isn't strictly speaking "Godly Play" - which has a very strict methodology. Then we got caught up with trying to get all the new prayers up onto the site - which we have still failed to do!

However, as we have started travelling around the country for worship, we do realise that there is a need for imaginative resources for storytelling for all ages.

So we have now got round to photographing - and putting online the first few of our story scripts strongly influenced by, but not limited to the Godly Play methodology! Not surprisingly, we are not calling them that. We've adopted the term "Dancing Stories" instead.