Where is the Sun?

About a month ago, some gentlemen in yellow vests and hard hats came and put up scaffolding around our house. They promptly covered the scaffolding with yellow protective sheeting, blocking all light from the front of our house. Then they left. Since then we have seen one workman, for one morning. He ground all the mortar out of the brickwork, leaving the house, garden and street covered in a thick layer of red brick dust. He had, at least, taped up the door and letter box.

Since then, we have seen no one. It is now three weeks since anyone actually did any work on our house and, quite frankly, we are getting rather fed up of living on a building site.

Ordinarily, we would escape to Clare and Andy's house - but, of course, that has been a building site since last June!

Even since I took the pictures linked to below in December, the area has been transformed. Where once there were houses, today there are empty spaces. In what seemed a rather desperate piece of synchronicity, the producers of East is East - which was filmed here 12 years ago - decided to come back and film the death throes of our community for their sequel, which I believe will be called West is West! We receive an almost endless stream of students on 'field trips' coming to 'study us.' 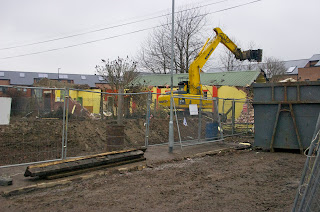 And today, when we were supposedly on holiday, I got a phone call to say that the demolition of the old Mersey Street church building had started. So, when we got back this afternoon, I dashed round to take some more pictures which you can see by clicking here. A suitable souvenir of what has been a horrible New Year for all of us so far.
Which is why we're not posting much at the moment. We don't want to depress you all. Roll on Easter, I say. We could do with a bit of resurrection!
Posted by Tim at 16:11 2 comments: